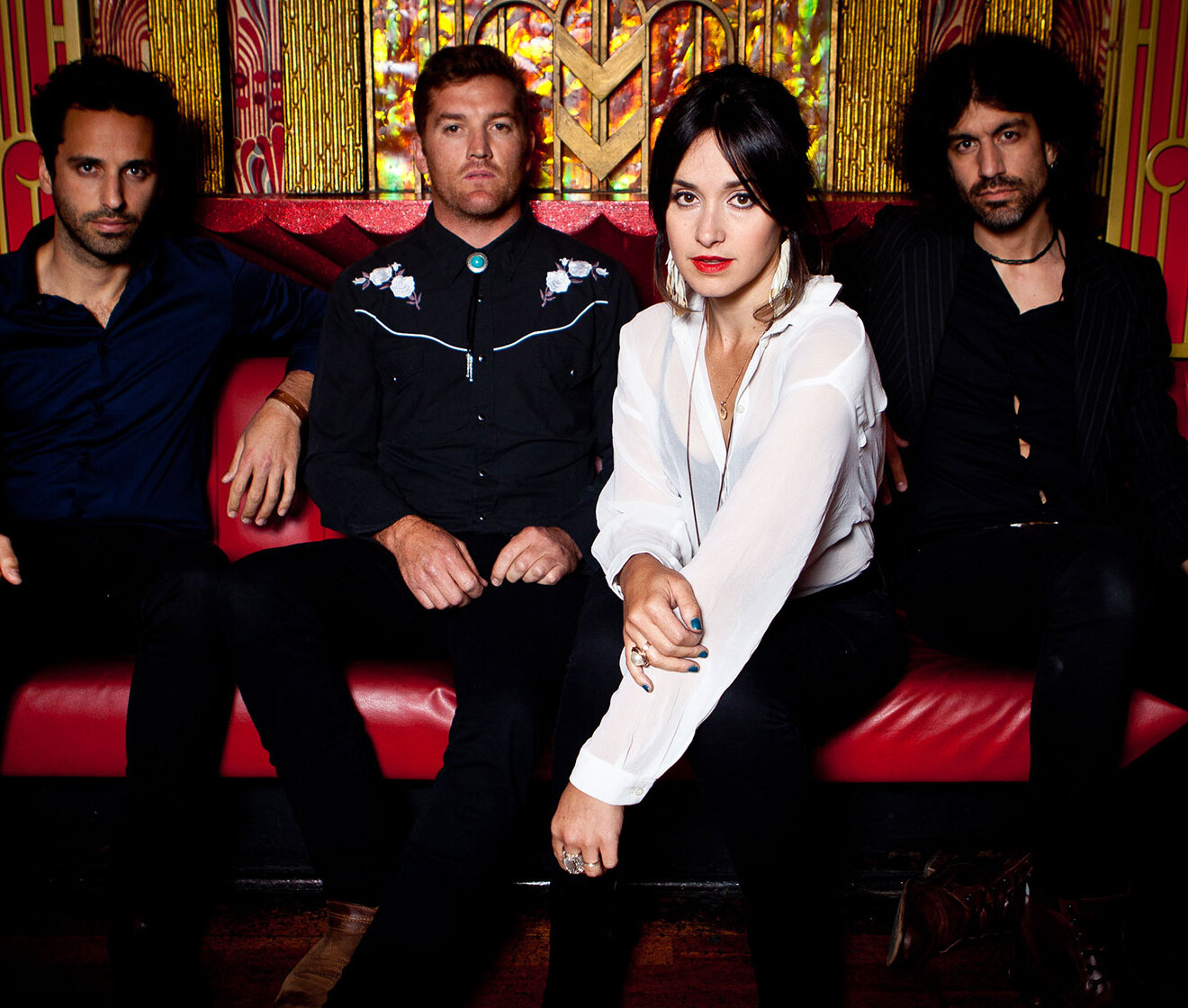 Bohemian rock’n’roll. With Howling Bells, that’s the truth, the essence, of what you hear. And not in some laudanum-crazed, living-in-a-squat, dust-for-dinner clichéd way. The roots of front woman Juanita Stein and her guitarist brother Joel go beyond that – to the Czech state of Bohemia where their paternal ancestry, as well as a long line of artistry originates from.

The foursome were formed in Sydney, have recorded in Los Angeles and Las Vegas, and now call London and Berlin home. And with the recent addition of London born and bred, bass payer, Gary Daines, there’s a renewed energy within the band.

Howling Bells may have left Australia almost ten years ago, but that dusty Outback isolation that characterized drummer Glenn Moule’s upbringing has never left the band’s music – there’s a genuine sense of grittiness that's hard to escape. Now we can throw into the mix the spirit of the homeland of a 19th century émigré family transplanted from the Old World - the Czech connection.

? “My dad’s very influenced by religious ideology and I guess that’s spilled over into our music as well, I do tend to see life consistently in religious symbolism. It’s such a beautiful language, and it manages to phrase and frame things in such a perfect manner. I find it easy to take those words and sentiments and insert them into everyday life. I feel that Howling Bells’ music takes a lot from that.”

And so to the foursome’s fourth album, Heartstrings. It was written in a “creative spell” in the basement of Juanita’s north London home last October. And it was recorded with an equally purposeful and quick smart sensibility in London’s Assault & Battery Studios the following month by Catherine J. Marks (Foals’ Holy Fire, PJ Harvey’s White Chalk) with legendary producer Alan Moulder (My Bloody Valentine, The Killers, Depeche Mode).

It’s a concise blast of melodic power, with one song recorded each day. Heartstrings spans the piano-led chamber pop of Paper Heart and the MBV-go-Spector fuzz-tune landscapes of Your Love – and overall, positions Juanita’s honeyed voice and melodies in “a really stark, cold dark place”. And generally, it’s an album that both abstractly channels the Steins’ past and directly draws from it too, in that song by their dad.

Titled Tornado, the turbulence referenced in Peter Stein’s song was something to which Juanita could relate. She’d had her first child between the release of 2011’s The Loudest Engine and the recording of Heartstrings in London in autumn 2013. Motherhood resulted in the band’s longest break since they’d formed a decade ago, meaning that, while she was personally fulfilled by motherhood, artistically the singer/songwriter was champing at the bit to create again.

“I wanted this album to specifically have ten songs on it and no more – ’cause I personally start to lose interest after ten songs. I wanted it to be pacy and brief and full of good and meaningful music,” she says, rhythmically punching the palm of her hand for emphasis. “And Tornado fitted perfectly with that idea.”

This idea also explains the choice of the punchy, viscerally anthemic Slowburn as the first single.

“And also,” adds Juanita, “lyrically the track is very personal. I feel like a slow-burner. I’m a very late bloomer. Everything happens slow and late. So it’s like a pound of frustration packed into that two-minute-30 pop song. Ironically, writing and recording it, I learnt that I really had to get it out there quickly as I could.”

Heartstrings itself, meanwhile, is the oldest song on the album. This is the band’s third or fourth attempt at recording an atmospheric number crying out for a David Lynch soundtrack moment.

As to why this song gave the album its title, Juanita explains: “I like that the word does mean the most emotional of feelings. It just feels right for this record, ’cause there are extreme highs and extreme lows on it, and as a band we’ve tumbled through all of that. So it feels nice to come out at this place where I feel that this album is really open and expressive. That title encapsulates that.”

The howling, racing Reverie, she adds, is another summing-up song.

“It’s the first line: ‘I’ve come full circle, I’m here again, I’m poised and ready for the lions’ den…’ I literally feel like that,” she smiles. “I am very, very accepting of who I am and who we are as a band. And if this is the last record Howling Bells make, I’ll die very, very happy.”

But before that long-off eventuality, Howling Bells will be getting back out on stage. They’ve always been a hard-touring band, and arena supports with The Killers and Coldplay only heightened their enthusiasm for reaching out to their audience.

“Doing those big tours influenced the scope and depth of musical creation for me. It’s affected how great and big and epic I believe a song can be. You watch Brandon Flowers or Chris Martin appealing to 20,000 people and somehow connecting with them, and it’s fucking remarkable. You’re sitting there at the side of the stage watching it happen. You can’t help but go away and write songs with that experience in mind."

“And we’re still very much a live band. I’m desperate to tour again, and connect with an audience again. There’s no way for an artist to gauge people’s reactions to a song unless you’re playing them live and feeling that response back. Twitter’s not gonna do it, Facebook’s not gonna do it, online comment aren’t gonna do it. I need to feel them,” she concludes.

In short, Howling Bells need to feel those heartstrings being tugged.