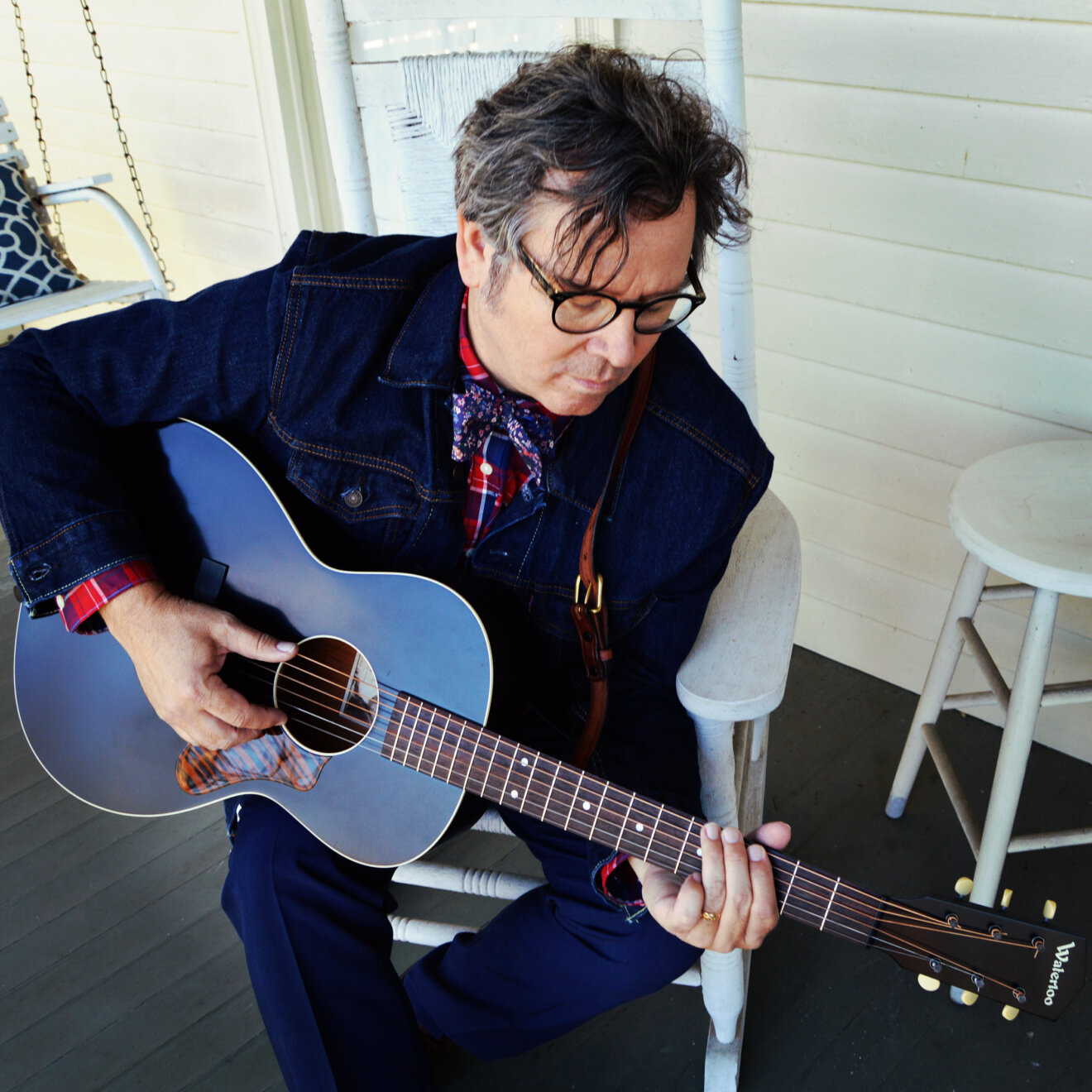 “I’m drawing on the urgency of the moment,” reflects Grant-Lee Phillips. “the things that eat away in the late hours…"

With Widdershins, Phillips invests the insight, nuance, and wit that has distinguished his songcraft over the past three decades in a riveting dissection of today’s fraught social landscape. Beneath the moment’s tumultuous veneer, Phillips uncovers resonances spanning centuries – patterns echoing from the present day to the distant past. In doing so, he unearths deep reserves of hope and even humor, transcending shock to reveal age-old cycles and archetypes – which Phillips delights in resurrecting. Phillips explains. “I made a commitment to myself not to sink into despair: I’m tracing a longer narrative here. We’ve been through some of this before – not just our country, but the civilization as a whole… ”The urgency that first spurred Phillips informs Widdershins both lyrically and musically, as its twelve songs arrive in a headlong rush, with the sharp trio of Phillips (guitar, vocals, keyboards), Jerry Roe (drums), and Lex Price (bass) serving as messengers. Recording live in the studio – with all of Phillips’s vocals sung while cutting basic tracks – emphasizes the clarity and prescience of the material.

Says Phillips, “This moment is explosive, volatile, and heightened. It’s important to me that the music reflect that – not just lyrically, but how it wallops you over the head. It should convey that same spirit of revolt, upheaval, and absurdity.”The album’s title – meaning to proceed counterclockwise – emerged from the buoyant, surging opener “Walk in Circles,” which throws down the gauntlet on the record’s frontline. “St. Augustine said the wicked walk in circles,” muses Phillips, “and I thought, I have no problem with that. Sign me up with the witches then, if that means moving in step with nature – but let’s not go backwards. ”From there commences a rogue’s gallery of charlatans, tyrants, and seers; a travelogue of manipulations, mannerisms, and misdeeds. “The Wilderness” examines our hair-trigger default to tribal divisions – that fatal tendency within us to cast out the other, making them the target of our fear and derision. Crowds also play a part in the satirical “Unruly Mobs,” in which Marie Antoinette condescendingly looks down upon the rabble proletariat, her playful disdain blinding her to the imminent tumult surrounding her. Phillips assumes the title role on “King of Catastrophe.” Choking back anxiety while thumbing the pages of history, he sings “It’s not as though we’re helpless and it has to be,” he sings. “They left a couple notes behind – they built a wall in Germany.” He describes the rollicking “Miss Betsy” as “a parlor song about the horrors of child labor. The character is essentially a wicked stepmother, a cruel headmistress – with just a hint of Mrs. Robinson tossed in for melodic pleasure.”

Phillips’s explorations reach a fever pitch on the terse, driving “Scared Stiff.” “I wrote that so quickly,” he recalls. “One sitting, in a sweat, thinking about intimidation, people feeling up against a wall.” Humor pervades, as the song nicked its title from a vintage Jerry Lewis and Dean Martin horror/comedy.

By turns sardonic, provocative, and illuminating, Widdershins delivers its poetic truths in Phillips’s peerless melodic sensibilities, relayed via vocal performances that balance intensity and vulnerability. Consistent with his many albums, Phillips presides over the production of the album. “By the time it’s done, I will have walked every inch of the album,” he says, “surveyed every alcove, crawled up in the attic. I approach being my own producer with the seriousness of a builder – just as I would if I were producing someone else.” Basic tracks were recorded over four days with engineer Mike Stankiewicz at Sound Emporium in Nashville. “He was so fast. We flew through songs and Mike never missed a beat or a button. I took it all home, added a few more brush strokes, but I knew we had something special when I left Sound Emporium.

”While this is the second album recorded with the Roe/Price rhythm section, it marks the first collaboration between producer Phillips and Widdershins mixer Tucker Martine (case/lang/veirs, My Morning Jacket, Bill Frisell, the Decemberists, Punch Brothers, etc.) “I’ve wanted to work with Tucker for a long time,” says Phillips. “It was clear that we spoke the same language and had comparable sensibilities.” For instance, when starting work on the backhanded salute “Totally You Gunslinger,” Phillips suggested they aim for a mix that combined Roy Orbison with The Smiths. “Somehow that made as much sense to him as it did to me.”Grant-Lee Phillips’s gifts for reconciling classic touchstones with an adventurous sensibility has distinguished his work since he first emerged as the frontman of the acclaimed trio Grant Lee Buffalo in the early ‘90s. At once cinematic in scope and disarmingly intimate, the band’s music set the table for a varied, captivating solo career that embraced electronic soundscapes (Mobilize, 2001), reimagined country-rock (Virginia Creeper, 2004), faced fatherhood (Little Moon, 2009), delved into his own native American heritage (Walking in the Green Corn, 2012), and reflected upon his own life-changing move from Los Angeles to Nashville (The Narrows, 2016).

Whether fronting a band or performing solo, he is a riveting live performer – which many discovered through his role as the town troubadour on the cult television hit The Gilmore Girls (both in its original run and the 2016 continuation).Phillips sees in Widdershins a connection to his earliest work with Grant Lee Buffalo. “That was also a time of intense social anxiety. The Gulf War, the LA riots – everything became cranked up. Then a few years later there was the earthquake we lived through, which also made for a time of uneasiness. I was in a heightened state when I wrote that stuff – as I am now.”

As the past and present converge and the journey of Grant-Lee Phillips continues, his craftsmanship continues to blossom. In times of tumult, he awakens comfort and hope by shining light into darker corners. “I hope to express my faith in people, my faith in the good ideas we’re capable of, and that regardless of what opposition we face, the fact that we can surmount these things,” he concludes. “We can stare them down, laugh at them, belittle them, and drive the darkness back into a hole. Music is a way of kicking some of these giants out at the knees – along with a bit of gallows humor: All the noose that’s fit to print…”