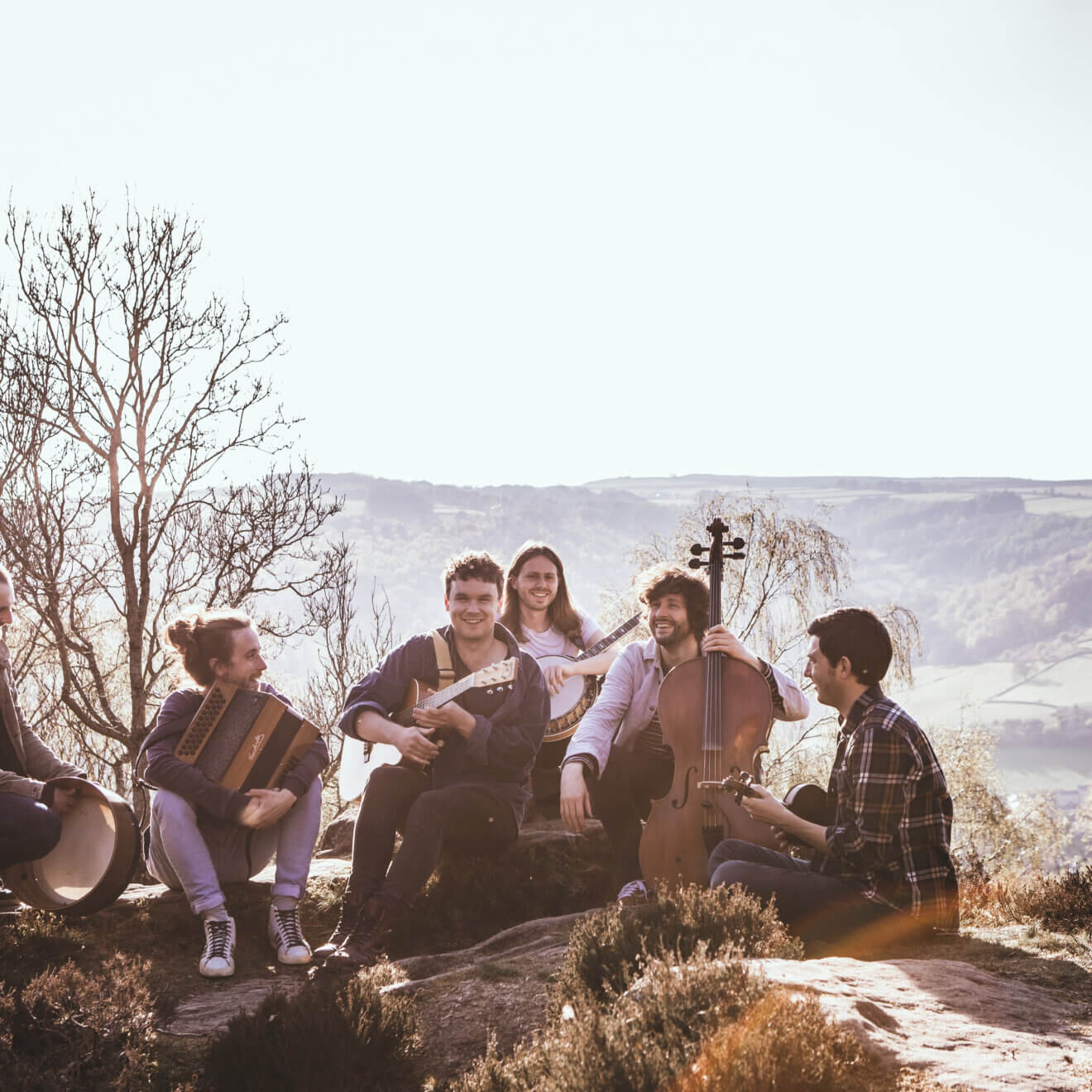 One of the most exciting bands to have entered the UK folk scene in the past twenty years, The Lost Boys is the brainchild of BBC Radio 2 Folk Award winning singer, songwriter, multi-instrumentalist and producer Sam Kelly. The Lost Boys band has gained a reputation as one of the best live acts in the UK and they have packed out festival tents and venues the world over since they started in 2016.

With the virtuosic talents of Jamie Francis (banjo), Graham Coe (cello), Toby Shaer (whistles/fiddle), Archie Moss (melodeon) and Evan Carson (drums), The Lost Boys have become known for their eclectic and innovative reworking of traditional songs and tunes from England, Scotland, Ireland and the USA, as well as stunning original music and the occasional surprise classic rock cover.

Described by Seth Lakeman as ‘one of the best bands on the scene’ and by broadcaster Mark Radcliffe as ‘amazing, thrilling music’, expect to hear uplifting melodies, soaring harmonies and high-octane instrumental performances of the highest calibre - all lead by Sam’s stunning vocals and tempered with a dash of cheeky humour. After the critically acclaimed album ‘Pretty Peggy’ saw them nominated for best group at the BBC Radio 2 Folk Awards in 2018, The Lost Boys have finished a hotly anticipated new album of brand new material, due for release in summer 2021. This show will be part of the album launch tour and will feature never-before-heard performances of brand new material.

"Sam Kelly, who I just love. What a beautiful singer. He has that really rare male voice, that soft-edged tone, you know those beautiful tenor voices of the 30's and 40's...it really draws you in. Sam's absolutely great, he's going to go places." Kate Rusby (on the 'next big thing' in fRoots magazine)

"One of the best folk bands on the scene." Seth Lakeman

"Sam has such a beautiful voice and sings with so much soul. I've seen him perform live a few times and he's amazing" Cara Dillon

"I think this guy is absolutely brilliant… His voice is beyond sublime." Mike Harding

"A captivating performer, Sam Kelly has one of the best young male voices in British acoustic roots music. Seriously...Check him out!" Sean Lakeman

"This is the album that the folk world has been awaiting... The Lost Boys is going to be huge." Folking.com

Having been honing his song-writing craft and live performances over the past decade, George Boomsma has been quietly gaining some well-earnt attention and acclaim. Based in Northallerton, North Yorkshire, George's pure voice and tumbling guitar make for a bewitching combination – warm and melancholy, melodic yet forceful, he exhibits a maturity and poetic lyricism that have left audiences around the country entranced. He has been invited to play alongside many impressive and established artists such as Paul Smith (Maximo Park), Neill Maccoll, Kathryn Williams, Michele Stodart (Magic Numbers), The Travelling Band, Skinny Lister, Chloe Foy, Jefferson Hamer, Emma Langford, Martha Tilston and Katherine Priddy. On top of these live performances, his music been featured on BBC Radio 1 and BBC Radio 6 Music.

Whilst 2020 saw much of the world grind to a halt, George Boomsma got busy, using the time to write and record an exciting new 4 track EP. 'Chinatown' was recorded live to tape at Echo Zoo Studios and features not only George’s effortless vocals and masterful acoustic guitar, but also the addition of a string quartet, adding an extra warmth and movement to his transporting songs. The production process has carefully maintained the characteristic saturation and crunch of tape recording, giving the tracks an exquisitely vintage sound not often heard in modern releases. 'Chinatown' is undoubtedly a step up from George Boomsma’s previous releases, both in terms of songwriting and production, solidifying his place as one to watch in 2021.

Back in 2014 George had been championed by BBC Tees' Bob Fischer after a live session on the Introducing show and also grabbed the attention of Tom Robinson, who remarked upon George’s "Heartfelt writing, heart-stopping vocals and a perfect poised performance”. George was chosen for the Longlist on Glastonbury's 2014 Emerging Talent Competition, which subsequently saw him set off on his first full tour in 2015, travelling the length of the UK with Old-time fiddle virtuoso and good friend, Kieran Towers. This further validated a continuing, steady rise in his reputation. Indeed, it led to an introduction from BBC Radio 2's Bob Harris on the BBC Introducing stage at Latitude Festival 2016.

After spending the majority of 2017 extensively touring the UK and The Netherlands alongside Leeds troubadour People Poems, the autumn of that year saw the release of his debut single 'Streets Paved With Gold' which exhibited a more produced and modern aesthetic to his sound with added instrumentation. This release was followed by another tour of the UK with piano extraordinaire Ridley Woof early 2018, ending with the opportunity to perform for a series of sold out concerts celebrating the music of Nick Drake at The Georgian Theatre, Stockton and Cluny 2, Newcastle. He finished off 2018 with a tour of Ireland and the UK with Irish singer/songwriter Hubert Murray, ending with a sold out show at the reputable Greennote folk club in London.

2019 continued to see George’s reputation grow with a Spring tour, travelling the length and breadth of the country performing for up and coming indie-folk singer, Chloe Foy, on her national tour. This lead to a headline show on the BBC Introducing stage at Hardwick Live in the Summer. He also managed to squeeze in a musical appearance on UKTV’s 'Taskmaster' alongside comedians such as Rhod Gilbert and James Acaster. Autumn followed with a support tour with Mercury Prize nominee, Kathryn Williams, on her Anthology tour of the UK with a notable show at The Sage, Newcastle. He then finished the year sharing the stage with rising folk star, Katherine Priddy on her debut national tour.