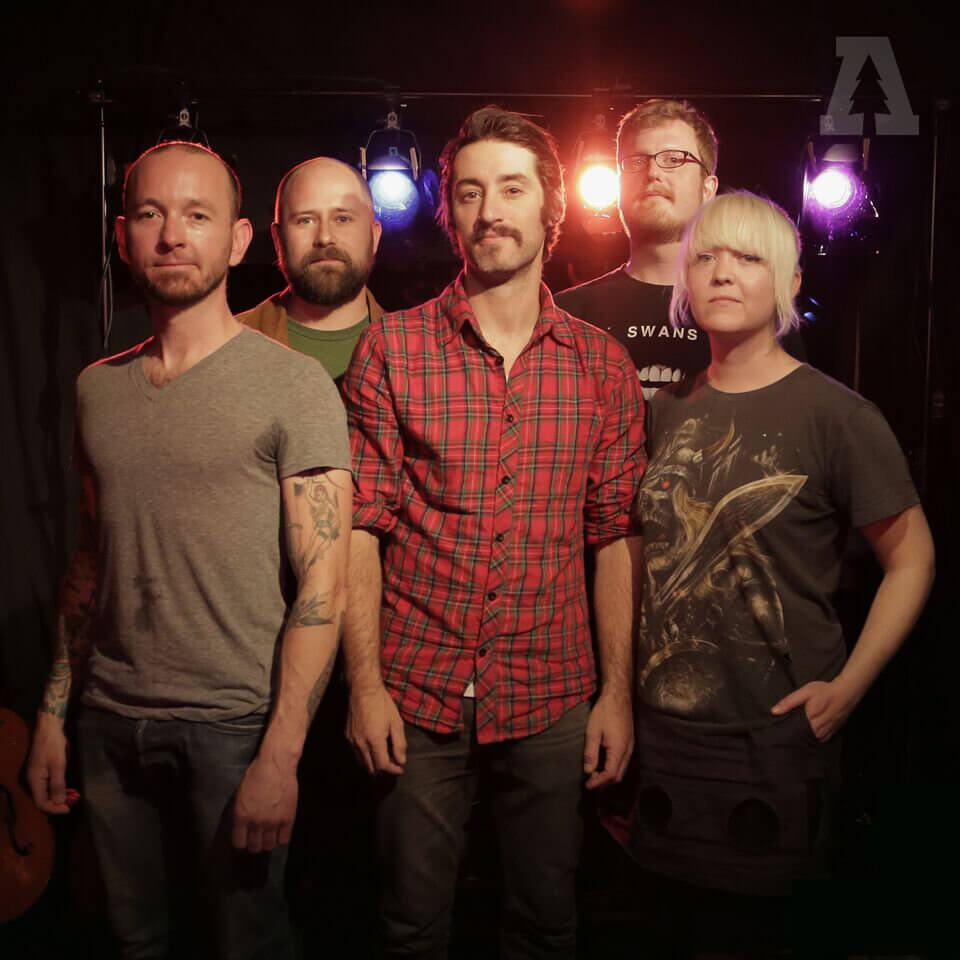 £17.50
Buy tickets
THIS SHOW HAS BEEN RESCHEDULED FROM SUNDAY 10TH MAY.

On the surface, Murder By Death is a Bloomington, IN quintet with a wry, ominous name. But behind the geography and moniker is a band of meticulous and literary songwriters matched by a specific brand of brooding, anthem-riding balladry and orchestral indie rock.Murder By Death’s path began in the early 2000s as most Midwestern college-town groups do, by playing to small crowds at ratty venues and frenzied house parties. While many of their formative-year scene-mates failed to make it much further than campustown’s borders, Murder By Death translated their anonymous beginnings into a 10+ year career founded on a bedrock of five full-length albums, tireless D.I.Y. touring and performing ethics, and, most importantly, a dedicated, cult-like fanbase.Since the band began in 2001, their audience has blossomed due in part to extended tours alongside similarly hardworking musical kin such as Against Me!, Gaslight Anthem, Lucero, William Elliott Whitmore, Ha Ha Tonka, and others.

Through more than 1,000 performances across the United States, Canada and Europe, Murder By Death has gained word-of-mouth devotees and support from the likes of media outlets like SPIN Magazine, who said of the band, “They brawl like Johnny Cash’s cellmates or dreamily swoon like Nick [Cave], stomping saloon floorboards in 4/4 time as grand strings fade into high noon.”

What resonates most with supporters is the band’s energetic, unique, and altogether consistent sound and conceptualized vision. The personnel and ingredients of the group consist of Sarah Balliet’s throaty cello melodies, singer/guitarist Adam Turla’s booming baritone vocals and brawny guitar strumming, drummer Dagan Thogerson and bassist Matt Armstrong’s locked-down, post-punk rhythm section interplay, and Scott Brackett’s (formerly of Okkervil River and Shearwater) multi-instrumentalist bag of tricks (including piano, trumpet, accordion, mandolin, vocals, percussion). The overriding sound is an amalgamation of textures ranging from dark and desolate to upbeat and brightly melodic, all of it landing somewhere under the orchestrated indie rock umbrella.

The other mainstay signature element of Murder By Death’s identity has been built by the overriding concepts behind each individual album. Every successive effort conjures up fresh imaginative and tactile worlds – whether it’s the battle between the Devil and a small Western town (Who Will Survive and What Will Be Left of Them?, 2003), an arid land of death and redemption (In Bocca al Lupo, 2006), or just songs inspired by a retreat into the Tennessee mountains (Good Morning, Magpie, 2010).On September 25, the band releases their newest full-length and Bloodshot Record’s debut Bitter Drink, Bitter Moon. The album was written throughout 2011 in a basement in southern Indiana, and recorded in winter 2011 in Dallas, TX with producer-in-demand John Congleton (Explosions in the Sky, St Vincent, Black Mountain).

Jason Hawk Harris hit rock bottom during the writing and recording of his debut full-length Love & the Dark. In the last few years, the Houston-born-and-raised, Los Angeles-based musician endured life-altering hardships—illness, death, familial strife, and addiction—yet from these trials, a luxuriant and confident vision of art country emerged.With an unlikely background, Harris is a singer/guitarist/songwriter who walks his own line, one that touches on Lyle Lovett’s lyrical frankness, John Moreland’s punk cerebralism and Judee Sill’s mysticism and orchestral sensibility. There’s even the literary and sonic audacity of an early Steve Earle, an outlaw unafraid to embrace harmony.

Jason’s grandfather exposed him to country music at an early age, and his family celebrated holidays with group sing-alongs. In his teens, Harris began listening to punk, indie rock, and, notably, Queen. In some part inspired by the instrumental flair of Freddie Mercury & Co., he later took the educational plunge into classical composition and was eventually wait-listed for the master’s program at UCLA, when things took a turn.While touring and performing in the indie folk band The Show Ponies, Jason started writing his own songs, intuitively returning to his country roots but incorporating his classical and rock ‘n’ roll performance skills. He released his first solo offering, the Formaldehyde, Tobacco and Tulips EP in 2017 and hit the road.

Meanwhile, his world fell apart: his mother died from complications of alcoholism; his father went bankrupt after being sued by the King of Morocco; his sister was diagnosed with multiple sclerosis and gave birth to a premature son with cerebral palsy; and—subsequently—Jason got sidetracked by his own vices.Love & the Dark is not THAT country narrative, though; that of surviving through pain. But it’s not NOT that either. This is his personal narrative on death, struggle, and addiction, of a life deconstructed and reassembled. From the opener, “The Smoke and the Stars,” it’s apparent this album will take you to compelling new places. An ache, a longing, claws its way out of the speakers, the gradual drone blossoming through without rigid genre designs. You can hear the essence of classical music in a long crescendo; you can feel his Houston upbringing in JHH’s soulful and humid inflection; you can sense his Los Angeles home in the sharp and risky dynamics. You can also hear the joy and exquisite desperation when he swings for the fences, belting “Maybe I was just waiting for you, to get through the grapevine, tear down that door, and let me live in those green eyes of yours.On “Cussing at the Light,” the classic “drink-you-off-my-mind” trope has an updated countrypolitan vibe with its precise harmonies courtesy of Natalie Nicoles, and later a raucous teenage urgency rumbles through the punchy “I’m Afraid.” The buoyant roots-pop “Red Room Blues,” featuring vocals by folk/bluegrass maven Rachel Baiman, touches antecedents stretching from Jason Isbell to Nick Lowe.

In the dark balladry of “Phantom Limb” (also sung with Baiman), when he softly describes his mother’s funeral through keenly personal details, “I got this shirt. Smells like the viewing/ Formaldehyde, tobacco and tulips/ I’ve washed it ten times, and it won’t come out,” he takes us to the bottom with him.While his music acknowledges mortality, pain, and hardship, it’s also Jason Hawk Harris’s way of working through it. Love & The Dark is a hypnotically convincing album; you can feel the unknown, but you need not fear it.