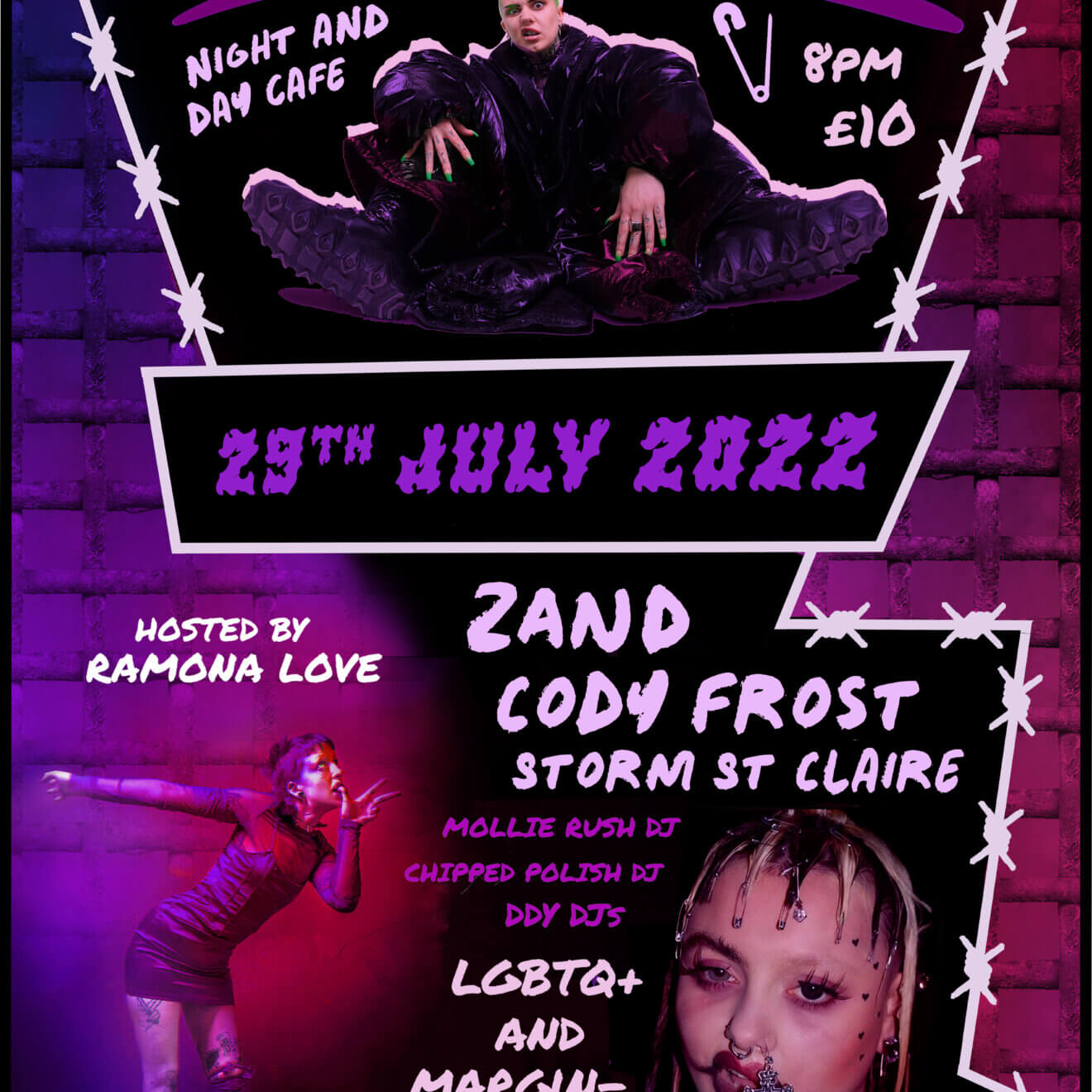 Double Dare Ya are launching in Manchester!

After successful events in Sheffield, queer collectice ‘Double Dare Ya’ are bringing their queer, femme and marginalised gender celebrations to Night and Day Cafe in Manchester on 29th July 2022.

Headlined by Zand - 'Ugly Popstar' ZAND is an artist for the current age of global uncertainty. The non-binary Blackpool born artist coined the term ‘ugly pop’ to describe not just their own genre and boundary breaking sound, but with ‘ugly’ acting as a double entendre; touching on topics and telling queer stories in such a manner that could be considered controversial in today’s male-dominated, cis heteronormative society. Demonstrating their prowess as a triple threat (singer, songwriter and producer), ZAND has accumulated millions of streams on Spotify alone, with tracks such as the latest I Spit On Your Grave, 2021's Religion, and 2020's cult favourite Slut Money to name a few; garnering a diverse fanbase worldwide and blazing their own unique stamp on the alternative scene.

Support from Cody Frost - Originally from Burnley, Cody Frost has been singing for as long as they can remember. Aged 13, encouraged by her musician mum, Cody was sharing versions of songs by Frank Ocean, Nirvana and Slipknot on YouTube. By 14 they were taking the 45-minute bus trip to Manchester to busk. It was an experience that helped Cody’s voice develop its power, though, as without a microphone she was forced to belt out her performances without one. Now in their early twenties, Cody has recently released a mixtape ’Teeth’. A maximalist mash-up of amplified aggression, experimental exploration, and dramatic dynamics, it also sees Cody’s forthright lyricism becoming ever more candid.

And Storm St Claire - London based bratty rockstar, blending pop, punk and rock with a pinch of chaos and rebellion. Storm St Claire is a fresh face to this industry and a true genre smasher, with every single representing a different take on pop music. Accompanied by their creatures known as ‘The Hellbunnies’ who live as Storm’s shadow creating a creepy cute dynamic for this artist. Mastering high energy immersive sets, using performance art and soft but punchy vocals with support from the tartan-covered badly-behaved Hellbunnies. Using strongly relatable lyrics coated in beautiful melodies, makes anyone who listens to the artist feel understood and not alone.

DJ sets from MX World - MX W0RLD is a multi-genre, non-binary Northern powerhouse of a DJ. Since 2016 they have been DJing as part of the Manchester based all womxn collective Thirsty Girls, hosting unforgettably fun parties across the North West. Raised in a music obsessed household, Charlotte has worked in several music industry roles since their teenage years, accidentally diving into DJing when they should have been studying at university, and spends most of their time falling down rabbit holes of new music on a daily basis. Sold out events at Soup Kitchen, Texture and The Deaf Institute led to the DJ collective opening for Anna Calvi at The Ritz, Years And Years’ secret set at Yes during Manchester Pride 2019, a slot at Manchester International Festival 2021, and spinning tunes at the Lush Showcase at Manchester Central. Charlotte has residencies at The Volstead and The Post House in Warrington, and Junkyard Golf in Manchester where they combine a multifarious mix of the old and new in their DJ sets, firmly of the belief that if it sounds good and you can dance to it, it should be played. Expect the undiscovered, the latest new acts, and the odd old favourite.

And DDY DJs - The team who bring you Double Dare Ya events spin their favourite queer and femme anthems. Think Britney to Bambie Thug - our DDY DJ’s will bring the noise.