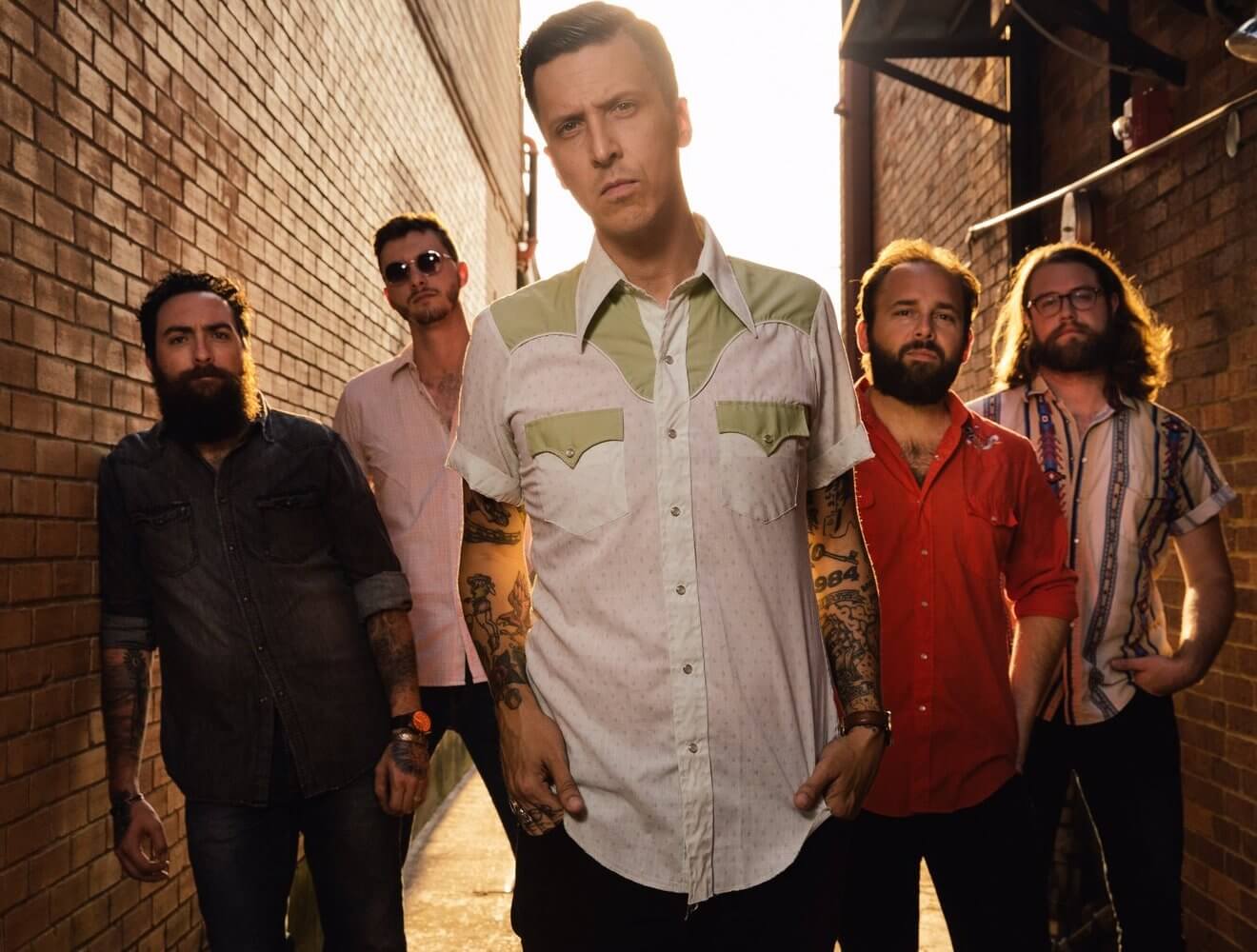 “Country music was the voice of the people. It wasn’t always the prettiest voice, but it was an honest voice,” says American Aquarium founder and frontman BJ Barham. “I think that’s where country music has lost its way.” He pauses, then adds, North Carolina accent thick and voice steady: “I operate in the dark shadows of what we don’t want to talk about in the South.”

These days, those shadows are tall and wide, making it hard to recognize a neighbor, family–– even yourself. On American Aquarium’s new album Lamentations, Barham shines light on dark American corners with heartbreaking conversations, long looks in the mirror, and empathetic questions, all through songwriting that is clear without sacrificing its poetry, and direct without losing its humanity. “As a songwriter, my number one job is to observe and then translate what I observe into a song, a story, a lesson,” Barham says. “I’d be doing myself and the listener a huge disservice if I didn’t talk about the things I see, which is a country, divided.”

As much as Barham appreciates an indignant protest song or one-sided anthem, he isn’t writing them. Instead, on Lamentations he’s making the political personal, reaching out to humanize folks with opposing viewpoints, and offering dignity instead of demonizing. The result is the strongest writing of Barham’s already stout career. “I’m still very much standing up for what I believe in––I don’t think anyone can question what side of the aisle I stand on,” he says. “But hopefully people listen and at least try to understand why their Sunday School teacher wears a Trump hat.”

A beloved live band known for consistently playing at least 200-250 dates a year, American Aquarium chose to be more selective in 2019, winnowing the schedule to 92 shows. For Barham, sober for six years now, is a dad to a toddler and still happily married, the adjustment was a must. “We’re learning how to balance being in our mid-30s and being rock-and-rollers,” he says. “Being home was the most rewarding experience. It allowed me to be creative and write about things that really matter.”

Lamentations reflects that elevated focus. Barham, who is no longer religious but was raised Southern Baptist, wrote down the word “lamentations” in 2018, and knew it’d be his next album title before he’d written a single song for the record. He felt an anchoring connection to the word itself––defined as “the passionate expression of grief or sorrow”––but also to the Old Testament book in the Bible. “Lamentations is one of the few books in the Bible where there’s this doubt of God––this guy, crying out to the heavens, like, Why? If you love us so much, why did you let Jerusalem fall to Babylon?” Barham says. “I saw a direct correlation between that and a Southern man today who voted for Trump. I wanted to write about a broken America and all the things that lead a human being to doubting something. Every song on this record touches on something a little different.”

Album opener “Me and Mine (Lamentations)” is brooding and stormy, plaintive acoustic guitar undergirding Barham’s weathered vocals. Searching, frustrated, and sad, the song was written from the perspective of a conservative Southern voter who feels unseen, unheard, and short on hope. The broader message is immersive and immediate: Settle in and listen closely. Times are hard, and this record is going to talk about it. Barham, who doesn’t agree with the song’s protagonist politically, imbues him with respect and sympathetic fatigue. “There are so many people who come out nowadays and say, If you voted this way, you’re a racist. You’re a misogynist. You’re a nationalist,” he says. “But that was my teacher, my librarian, my uncle. I know they aren’t bigots. So instead of saying, You’re a bad person because you did this, I want to know why you did this. I want to talk to you about this.”

Upbeat guitar rocker “Dogwood” follows, with a tragic story wrapped up in singalong lines. Barham points to the song and “Luckier You Get,” with its Springsteen vibes and an ear-worm chorus, as two of the album’s more lighthearted moments. “Bright Leaf” is another musical moment ready for a crowd, offering a clear-eyed look at the tobacco farms and industry of Barham’s home through sharp lyrics that thousands will shout-sing right back at him.

Featuring wry pedal steel and a shuffling back beat, “Better South” is an alternative anthem, written and sung by a native Southerner who believes in change. Line after line, “Starts with You” shows off Barham’s self-deprecating wit: “They say you’re only as sick as your secrets / If that’s the truth then, friend, I’m dying / Spent a lifetime salvaging shipwrecks, / Falling so long I thought I was flying.”

Throughout the record, the only victim of Barham’s harsh tongue is himself. Heartbreaking “How Wicked I Was” pleads for narrative omissions when it comes to explaining the past to his little girl. Album highlight “Learned to Lie” cuts just as deep: Barham delivers a gut-wrenching confession over lonely piano. Raw and intimate, its look at how we hurt the ones we love evokes the unblinking candor of 60s and 70s Loretta Lynn––that extreme honesty Barham first valued in country music, and now misses. “That was one of the first songs I played for the boys in the band, and they were like, ‘Are you sure you want to record that?’” Barham says. “It’s a hard song to talk about. It’s a heavy song. For better or worse, I’m going to be real with you live. I’m probably going to make you uncomfortable. And that I think that’s a beautiful part of rock-and-roll.”

“Six Years Come September” is another heartbreaker, masquerading at first as a familiar story before a sobering plot twist. “As a songwriter, that’s the best feeling in the world––ruining someone with lyrics and a well-executed story,” Barham says. He points to album closer “Long Haul” as a frontrunner for his own favorite track. Perhaps the closest the record comes to jubilation, “Long Haul” rolls through three steadfast commitments Barham holds true and dear.

Ultimately, Lamentations is a thrilling portrait of an artist and his band reaching new levels of skill, consciousness, and potential after 20 years in the trenches. Unruly and sincere, Barham emerges as an important American voice––and an unlikely peacemaker. “I’ve had to work really hard to carry water as a songwriter,” he says. “It feels really good to be in my mid-30s, writing songs that I think matter. I think when you listen to this record, something is going to change in you. You’re going to feel something. That’s the most important part of songwriting: making someone feel.

Kirby Brown was born in East Texas and moved to rural Damascus, Arkansas at age two. His formative years were spent on the farm where his taste for music was fostered, being exposed to gospel, bluegrass, and the classic country his grandfather would strum in the evenings. With the influence of his father, a closeted poet, he became interested in reading Whitman and Frost. This form of expression would become the bedrock on which Kirby’s artistic life would be built.

After the death of his girlfriend and his best friend, Kirby found an outlet for his pain in writing songs and moved to Dallas. He there began his musical career writing and releasing his first album, Child of Calamity. He has since toured all across America, headlining shows, playing alongside friends, sharing bills/ festivals with artists including Willie Nelson, The Flaming Lips, Leon Russell, and The Avett Brothers.

Kirby's latest release, Out of Exile was recorded an album at the legendary FAME Studios in Muscle Shoals, Alabama. The theme of this new record is a continuation of what his writing has always striven for—growing up and adjusting to the tides of change, searching for light in dark places, regret, hope, love, and redemption in the mundane repetition of everyday life.